Mukokuseki (無国籍) is the Japanese word for statelessness. Legal statelessness according to international law occurs when someone is “not considered as a national by any state under the operation of its law” and is a major problem for those suffering from it. The United Nations estimates there are around twelve million stateless people around the world today. Legal statelessness can occur for a number of reasons relating to laws around how citizenship is conferred through birth and who’s allowed to confer it and in edge case situations people can be born with no legal nationality. As a result, stateless people are often trapped in a dangerous legal limbo that follows them their whole lives and can be very difficult to get out of, locking them into a perpetual underclass.

Legally speaking, it’s not a very good thing to be stateless.

Nevertheless, I contend there is another way to be, in a sense, stateless, which is much more common, and while not really discussed as a formal bloc (more of an antibloc if anything), this newly emerging “race” may be the most important “ethnic group” to consider in the coming century.

In her novel Too Like the Lightning, Ada Palmer describes non-geographically locked “nation-strategies” as having become the dominant human organization system, having supplanted nation-states by the time of the novel’s setting four hundred years in the future.

I contend that we are already seeing the birth of this system of organization, and over the next century through various revolutions and reforms, revolts and upheavals, the era of the Westphalian State will come to as ignominious of an ending as its beginning.

Mukokuseki (無国籍) in addition to being the word for statelessness, is also used in a more technical sense in the anime industry to describe a set of characters who seem to defy membership in any particular real-world ethnic group. They want to appeal to as wide of a demographic as possible and thus try to depict characters in a sort of generic way so that most people will be able to relate to them better.

Japan does tend to have a thing about not depicting black people often or very well in anime, but it’s fairly common to have a character who is just sort of ambiguously brown or tan-skinned, like this photoshop of Ariel that’s been circulating.

A lot of this comes down to the fact that manga artists are in a hurry, and are drawing basic faces that they develop a hand for as fast as possible. Since anime (and most western cartoons as well for that matter) don’t use facial profiling, even when the character’s skin color is changed, they don’t really look that much like a member of a particular ethnic group, and in the case of anime, there’s usually an underlying premise that the characters are actually all Japanese. If they look like your own ethnic group…well that’s sort of the whole point, ね? Relatively little detail goes into the design of any particular character and anime faces are designed to be simplistic from the start in many cases, with their large and expressive eyes, minimal nose, and simplified mouth. When you draw all your characters with one of three basic faces and differentiate them from each other with hair, eye, skin color, and costume, weird things happen.

As a result of all this, what begins to emerge is in a sense the opposite of true statelessness, these characters end up almost seeming to belong within their own distinct ethnic group.

Mukokusekijin(無国籍人) can have hair and eyes of pretty much any color imaginable and can have skin ranging from pure white to a very dark brown, with some less common variants like grey, green, purple, and red thrown in for flavor. Sometimes they may also have animal ears or a tail. Sometimes this is explained in the lore, other times they’re just inexplicably catgirls.

Mukokusekijin are the inhabitants of a fictional, idealized version of Japan (particularly Tokyo) depicted in many anime and they have many particularities that differentiate them from the actual people of real Tokyo.

Japanese people are notoriously hands-off, they don’t even tend to shake hands, while mukokusekijin are much more physical than most actual Japanese people or Americans and use a level of touch more common in tropical and equatorial cultures. The Mukokusekijin also manifest a high number of queer individuals, and gender weirdness is more common among them than among the wider baseline population. The mukokusekijin are a highly ritualized people compared to America, and possibly even compared to actual Japan, and have many ceremonies and rituals and practices, most but not all of these are traditional Japanese rituals depicted in a more lighthearted way, but a few are anime originals and products of the intersection between American and Japanese culture, like maid cafes and sailor uniforms.

The depiction of traditional Japanese life in anime also tends to play up the best parts of it and hide or downplay the worst aspects and is really quite distinct from actual real Japan. It is a vibrant and friendly culture, collectivist, outgoing, affectionate, and kind. To someone like me who grew up in the atomized wasteland of America, they were clearly something to aspire to. To someone who grew up with a dearth of culture, the stateless but highly cultured nation of the mukokusekijin felt more like a home to me than any real place on Earth. 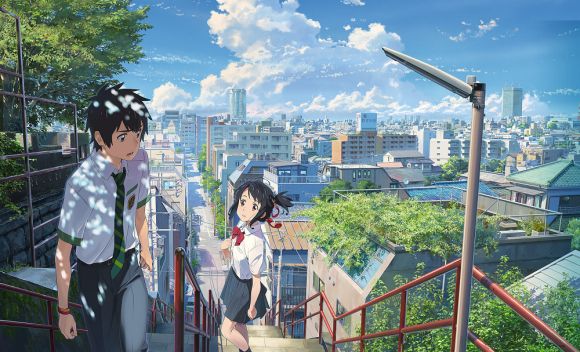 It’s 2019, and as a pink-haired anime-otaku living in a major city, an enclave for the weird and interesting, I find that I am not alone. I run into lots of other people with pink hair, and purple hair, and blue, and green, and every other hair color imaginable. Sometimes I wonder, if you just counted the number of people with technicolor hair, how many would there be?

The very most urban areas of the world have or are in a sense, in the process of shedding their parent states, in culture if not in literal governance. Scott Alexander talks about Elua, a culture that devours and consumes everything it comes into contact with, integrating it into itself, and this is somehow good. Neoliberalism yay I guess?

But what grows out of this environment? Because it is clearly not sustainable, however much the elders would like to believe it is. I think we’re starting to see it with things like group houses and pride parades, with the way a lot of the queer communities I’ve moved within are much more high-touch than the surrounding society. Is anime to blame for corrupting the youth? Maybe, I hope so.

However, something to remember is that while the values you see in children’s cartoons are the values that a society most wants to carry forward and believes itself to hold, that doesn’t mean that shows aimed at 12-year-olds are a particularly realistic portrayal of life in that society. So while anime Japan is a lovely and technicolor place, actual Japan is, while still a lovely country, not quite as amenable to human life.

And I think that this experience is one that many people across many nations can relate to. When we were growing up, we were fed an image of a bright, colorful, human-friendly world, a place that was kind and where people took care of each other, where the world was largely benevolent and society existed to support humans instead of to enslave them. Then we grew up and were tossed into the meat grinder that is our current civilization in #currentyear.

We were sold on a lie, and the truth was much less friendly, resulting in mass disillusionment, the collapse of societal norms and values, and the obliteration of many of our senses of agency and ability to act meaningfully in the world.

But out of all of that wreckage, we still have our values, and the lies we were told have become the moral truth we strive towards. The world isn’t like Star Trek, but it should be. Compassion, humanism, universalism, and a possibly naive belief that more is possible than the decaying cyberpunk dystopia we were handed. We took these things away with us, and if society didn’t reflect them, that was something that needed correcting, not coming to terms with.

So if you’re a queer, liberal, rainbow-haired city-dweller, who rides the train to work and likes tea and cats, maybe without even realizing it, you’ve left your old society behind and become one of the mukokusekijin, working to build that imaginary Tokyo here on Earth.

Support me on Patreon

Death:
One Hundred Billion Children’s Sky
Doors and Corners
Empire of the Dead
The Room Eats You
The Ends of Identity

Life:
The Plurality Series
The Silence Hidden in the Sound
The Nature of the Soul
Hemisphere Theory

Confessions of a Transhumanist:
On Life in Known Space

Narrative:
Objects in Thoughtspace
Basic Lens Model Theory
This is For Real

Culture:
The Internet Hate Machine
That Which May Yet Save Us
Against in Defense of Unreliability
The State of the Stateless
Yes, This is a Hill Worth Dying On
Why Do you hate Elua

Personal:
Vaporize
Kintsugi
Even if Your Voice Shakes

The fake that surpasses the real thing

Ashes to ash and dust to dust, paper to ink and steel to rust

Concepts too maddening to linger on

Don't Worry About the Vase

Trying to dig out from minus a million points

Risk, research, and life as a membrane-bound organism

The gradual supplanting of the natural by the just

The Universe is Bigger than you Think